At ServiceMaster Building Services, our days begin and end with our unshakable commitment to customers. We know that our approach to cleaning is an opportunity to provide remarkable service, not simply a commodity. With consistent delivery as the foundation of our business, we focus on service, diversity and training to deliver the fundamental basics of green cleaning with excellence.

We know that your needs are unique and we partner with our customers to customize our services to each business need. We continuously monitor the overall condition of the facility and the quality of our work. What’s more, customers get the personalized one-on-one attention of a local business combined with the best practices and stability of a Fortune 1000 company. We pride ourselves on going above and beyond. Our goal is much more than satisfying customers; our job isn’t finished until you are simply delighted.

ServiceMaster Building Services wants to be your local service provider. We are a minority-owned business that has operated in the Portland metropolitan area for more than 50 years. We hire and train qualified staff members. We pride ourselves on our quick responses to customer requests and the ability to provide a full range of commercial cleaning services.

To honor God in all we do
Faithful adherence to a strong moral and ethical ideal should guide all aspects of a company’s operation, as well as one’s personal life. It is not an expression of a particular religious belief or a basis for exclusion. Rather, it is a mandate for inclusion and constant reminder for us to do the right thing in the right way. We encourage everyone in our ServiceMaster family to live by principles of honesty, fairness and diligence.

To help people develop
As a leader in the business community, it is our responsibility to help people develop personally, as well as professionally. To this end, we provide our employees with ongoing opportunities to learn new skills and advance within our company. Expectations are clearly expressed and merit is rewarded through our system of incentives and awards. By motivating our people to fulfill their own potential and treating them with respect, we develop their confidence and their ability to contribute to the community, as well as enhancing the quality of their professional performance.

To pursue excellence
Only by providing service excellence can we achieve our goals. If we remain true to our principles, we cannot be satisfied with good enough. We must always strive to provide our clients with the highest in quality and value.

To grow profitably
It is our responsibility to remain a stable means of support for our employees. By growing profitably, we can set a positive example for the rest of the business community and that profitability is the by-product of hard work and ethical business practice. 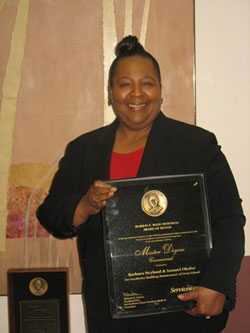 Portland, OR (September 2010) — ServiceMaster Clean presented the Marion E. Wade Master Award to Barbara Neyland and Samuel Okafor, owners of ServiceMaster Building Services, at the International Convention recently held in Boston MA. As the ServiceMaster Franchise of 2009, they displayed the highest achievement in the Pursuit of Excellence and Professional Management in the ServiceMaster tradition and were subsequently awarded the Master Degree. This is the first time in the history of the award that an Oregon franchisee has been the recipient.

The process of qualifying for the Marion E. Wade Award is challenging. First, the franchise must qualify for the Achiever Award by meeting a variety of criteria in order to be nominated, including a minimum revenue amount, a minimum growth percentage and a nomination by their Business Development Manager. From these recipients, the top franchises are selected for the Expert award. Out of that number, the top 5 franchises are given the Excellence Award. Finally, the top franchise is selected to receive the Marion E. Wade Master Award. The recipients who were honored at the convention represent the top performing franchise owners from over 4,500 businesses worldwide.

A clean and healthy environment is essential for all businesses and facilities, regardless of the industry. Now more than ever, detailed disinfecting methods should be in place to protect the guests and employees of your facility. The professionals at ServiceMaster Clean have the experience and skills to deliver spotless, pristine results. We are backed by over 65 years of experience and use advanced cleaning products and processes that will help eliminate dirt, dust, germs and bacteria from your environment.